Menu
Welcome to our School Website ! Please contact the school if you are thinking about enrolling and would like a look around. We have available places from Nursery upwards 0151 525 9776

On Wednesday 7th February,our school took part in the NSPCC Number Day 2018. The children enjoyed taking part in lots of fun maths activities during this day. Each class were also asked to bring in spare copper in order to raise money for the charity. Our mathletes and 6J were given the task of counting it all! The total changed throughout the day as more and more copper was being added. At the time of print, our school raised in impressive £140.47!

With the explosive night just days away, we take a look at some defining numbers behind the most colourful night of the year!

150mph is the speed at which some fireworks travel (the cruising speed of some planes!)

3 sparklers burnt together generate the same heat as a blow torch.

Midnight is the time that all fireworks must stop. For most of the year, it is 11pm but 1pm on New Years Eve, Diwali and Chinese New Year.

120 is the amount of decibels a consumer firework is allowed to be, the same noise limit as a chainsaw.

When you are buying fireworks for your garden, look for Category 2, Category 3 are display fireworks.

1/2 of all injuries happen to children under the age of 17. STAY SAFE AND REMEMBER TO FOLLOW THE FIREWORK CODE.

10-30 minutes is the number of minutes the NHS recommend you should cool a burn with cool/lukewarm water.

An arms length is the distance you should hold a sparkler with from your body. REMEMBER TO WEAR GLOVES!

Halloween is one of the oldest celebrations in the world, dating back 2000 years ago to the time of the Celts who lived in Britain.

About 99% of pumpkins sold are used to carve as lanterns at Halloween.

The biggest pumpkin in the world tipped the scales at a whopping 1,446 pounds. this was weighed at the festival in Canada in October 2004.

The record for the fastest pumpkin carver in the world is Jerry Ayres of Baltimore, Ohio. He carved a pumpkin in just 37 seconds!

Halloween is the second highest grossing holiday after Christmas.

Over the next few weeks we will be creating and uploading our own Maths dictionary, which we hope will help both our students and adults at home too. If anything isn’t clear or if you would like anything in particular added to our Maths dictionary please ask.

Algebra is when we use letters to represent numbers.

Sometimes, we see a number and a letter directly next to each other. This means that the letter and the number must be multiplied together.

Obtuse angle: this angle is between 900 and 1800. Bigger than a right angle but never more than a straight line.

Reflex angle: a reflex angle is an angle that has started to fold back on itself. It is between 1800 and 3600. 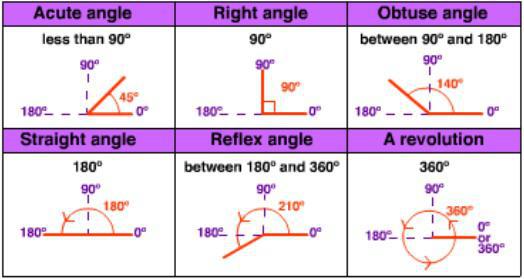 Area is how much flat space something takes up. This is always measured and written in squared units e.g. 100m2, 3cm2 or 20km2.

Squares: because all sides are the same length we can multiply the width by itself.

Rectangles: multiply the length by the width.

Triangles: multiply the length of the base by the height, then halve your answer (divide it by 2).

Arrays are a way of visually representing Maths questions or statements in pictures or symbols, to make them easier to understand. Equal groups are shown in rows or columns. The example below is a way of showing 4 groups of 6 or 6 groups of 4. 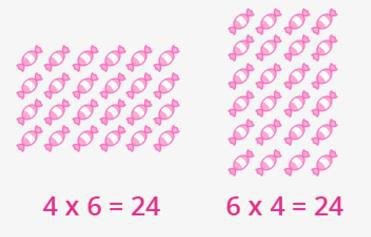 You add then divide for the mean.

The mode is the one that you see the most,

And the range is the difference between.

The median would be 6 (the middle number when they are put in order). If there is an even number of values you find out what would be exactly half way between them.

Mode would be 6 because it appears the most often.

BIDMAS is also known as ‘Order of Operations’. BIDMAS tells us the order in which to work out problems so that everyone who answers the same question will get the same answer.

BIDMAS can help us figure out which one is right. Below we show what BIDMAS stands for as well as some examples of the different operations.

Bridging is a way of adding that most of us probably do without thinking. In the question 9 + 6, for example, you might take 1 from the 6 to take you to 10 then add the remaining 5 to get the answer of 15. 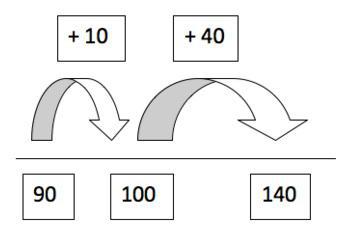 ‘Bus stop’ is a phrase that seems to really confuse adults when it comes to Maths. The bus stop method is just what we now call short division. It gets its name because it looks a bit like a bus stop. The sum 362 ÷ 7 set out using the bus stop method and worked out would look like this: 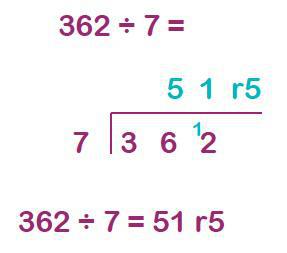 Chunking is another method for working out division questions that we might not be able to do in our heads. It involves repeated subtraction. To be able to do chunking well, you need to be confident with your times tables.

Let's start with a nice simple one: 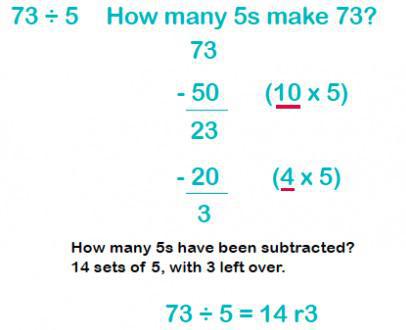 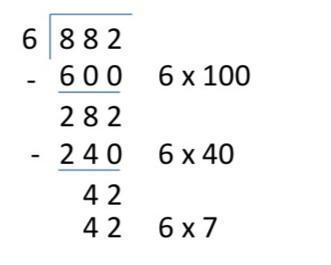 Tip- sometimes it helps to write out the times table of the number we are dividing by at the side of the page when doing chunking. If you can see on the page that 4 x 6 = 24 you could also use your Maths skills to work out that 40 x 6 = 240. 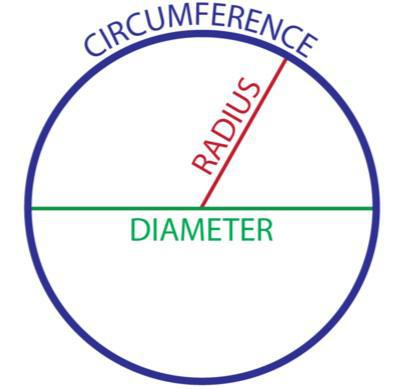 The column method for addition or subtraction is just the way we set out our sums so they are easy to understand and to help prevent mistakes. We always start with the ‘ones’ or ‘units’ column and then move left to work out the tens, hundreds, thousands etc.

Coordinates tell us the position of something on a grid. Coordinates are always written in brackets with the two number separated by a comma. The first number tells us the position on the x-axis (horizontal or left to right) and the second number tells us the position on the y-axis (vertical or up and down). In the younger years of school the children might be told ‘in the house and up the stairs’ to help remember the order. Higher up the school the children use positive and negative numbers so they might be told ‘along the corridor and in the lift’. 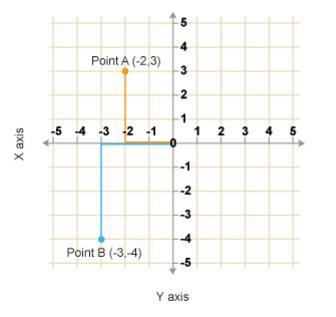 For easier division questions you can look at the entry under Bus Stop Method. Chunking is also a method that we can use for division, but another way that we need to learn is Long Division. Just the mention of long division can give people nightmares, but as long as you follow the correct steps all it takes is practice. Year 6 used the following funny video to help them master long division earlier this school year.

The Steps to Long Division.mov 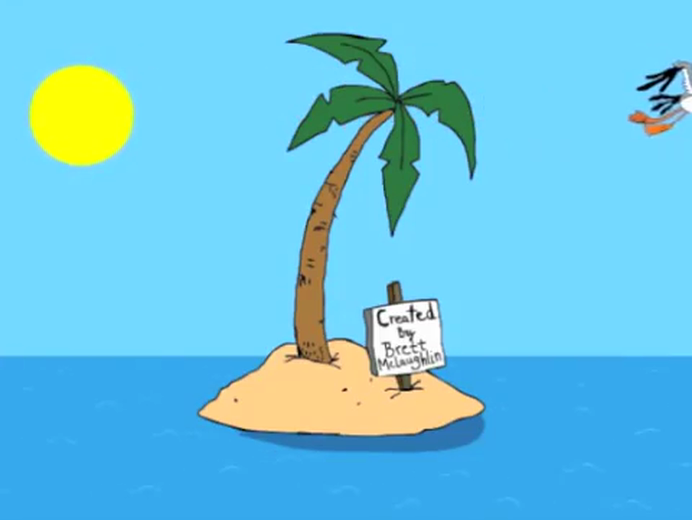 Mixed numbers are when we have a whole number with a fraction.

Improper fractions are when the numerator is larger than the denominator. 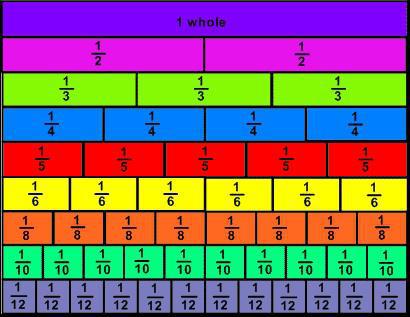 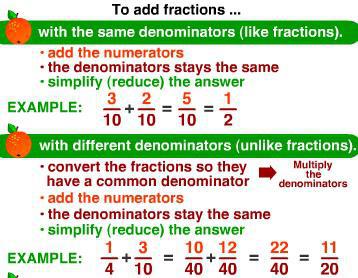 When subtracting fractions the process is almost the same as when adding. The only difference is that we take one numerator from the other. 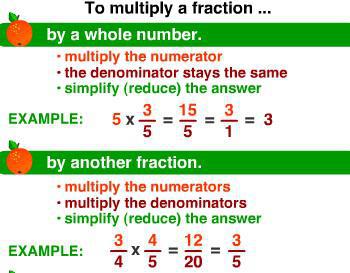 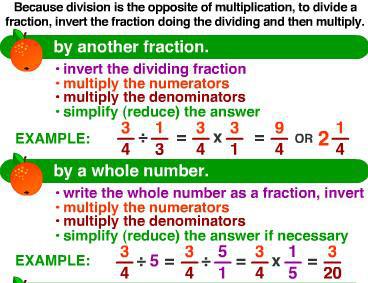 We should always try to put fractions into their simplest form. To do this we need to simplify. Here is another video, which Year 6 watched when they were simplifying fractions: 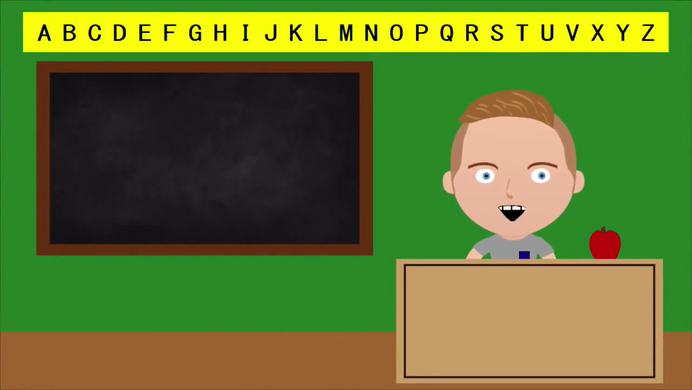 We use measure to find out the size or quantity of something. In school we almost always use metric measurements.

Negative numbers are numbers that are less than 0. When we are dealing with negative numbers we often have to count through zero. We can use number lines to help us with questions like this.

When two straight lines cross at a point the opposite angles are always equal to each other.

The angles around a single point always add up to 360˚.

Parallel lines are lines that always stay the same distance apart- a bit like train tracks. Even if the lines carried on forever they would never meet. 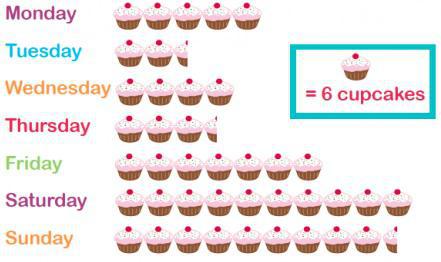 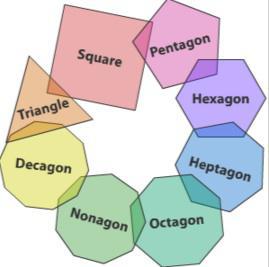 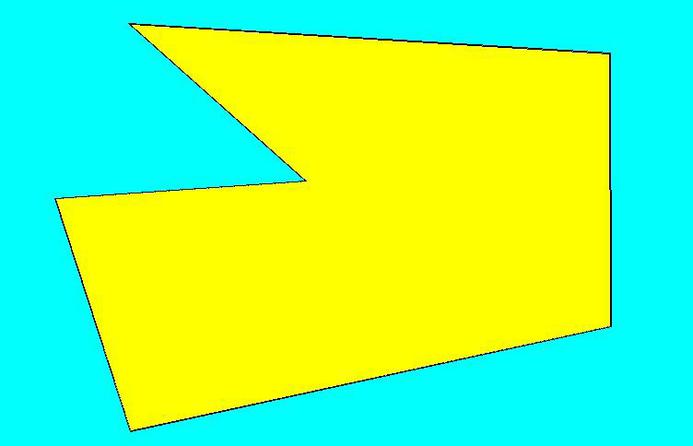 Ratio is a way of showing the comparative value of 2 or more amounts. We write ratio as two numbers separated by a colon ( : ). We will look at a couple of examples and hopefully it will make sense!

In 6A the ratio of adults:children is 1:11. This means that for every 1 adult there are 11 children. In 6A there are actually 2 adults, which means that there are 22 children.

This is a number system that has been around for thousands of years, and is still visible around us today. In Roman Numerals different letters represent different numerical values. 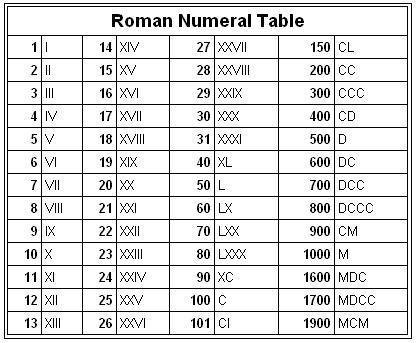 We have already mentioned a lot of different shapes in other parts of the dictionary, here we can see some of the properties of 3-D shapes. 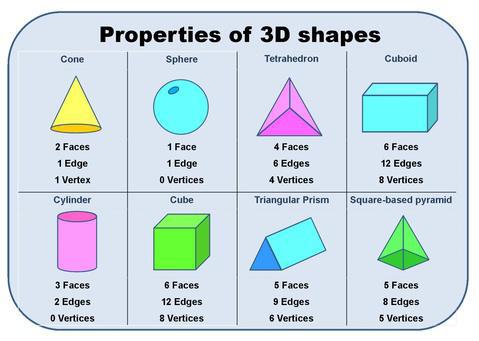 *Vertices is another way of saying corners.

Symmetry is when an object can be split in half by a straight line and each half is an exact mirror image of the other. The line that splits the shape in this way is called a line of symmetry. Shapes that can be split like this are called symmetrical. Some shapes have no lines of symmetry, whereas some have lots. The dotted lines below show the lines of symmetry for three shapes. 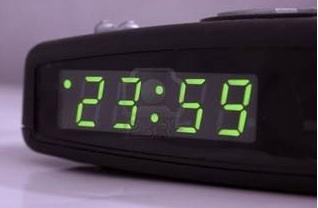 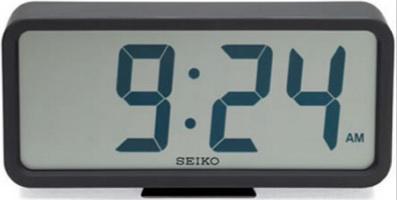 Transformations are the different ways that we can move shapes in Maths.

Reflection is when something is reflected in a mirror line. Each part of the reflection will be the same distance from the mirror line as its corresponding original part. 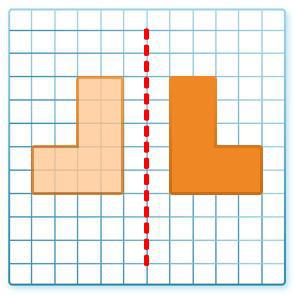 Rotation is when a shape is rotated (either clockwise or anti-clockwise) about a point. Sometimes we use tracing paper to help us with this, although in SATs tests it’s not allowed. In this example the shape is being rotated 90˚ clockwise about the point. 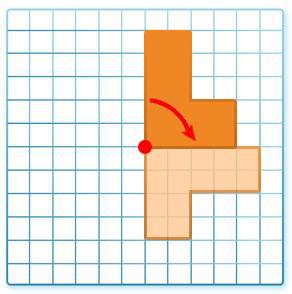 Translation is when a shape is ‘slid’ from one place to another. It stays the same way up, but moves horizontally and/or vertically. In this example, the original orange shape has been moved 1 square to the right and 4 squares up. 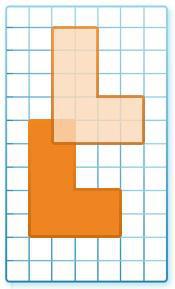 The main types of triangle that we need to be able to identify are:

Right-angled- has one angle which is 90˚ exactly

The interior (inside) angles of a triangle always add up to 180˚, this means that if we know what two of the angles are we can always find out what the value of the missing angle is.

Progression across the year groups

Children are taught the expanded column method when adding two 2-digit numbers. This involves them partitioning each number into tens and ones. They then add the ones followed by the tens. The tens and ones are then recombined to find the total. 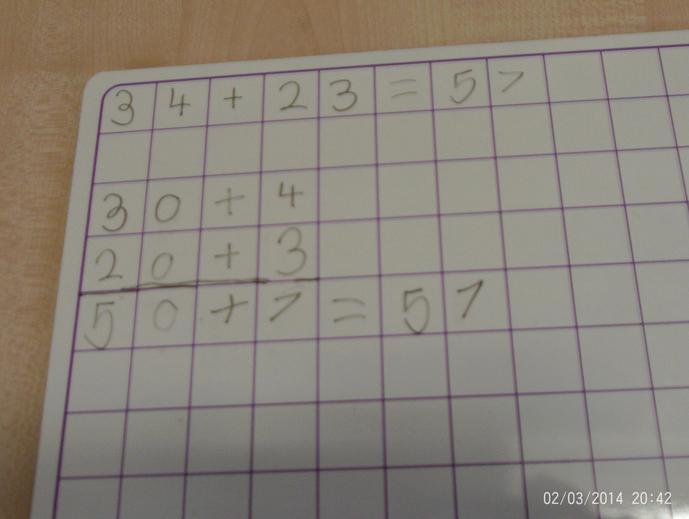 Children are also taught the expanded column method when subtracting two 2-digit numbers. This involves them partitioning the numbers into tens and ones. They then subtract the ones followed by the tens. They then recombine the tens and ones to find the answer to the calculation. 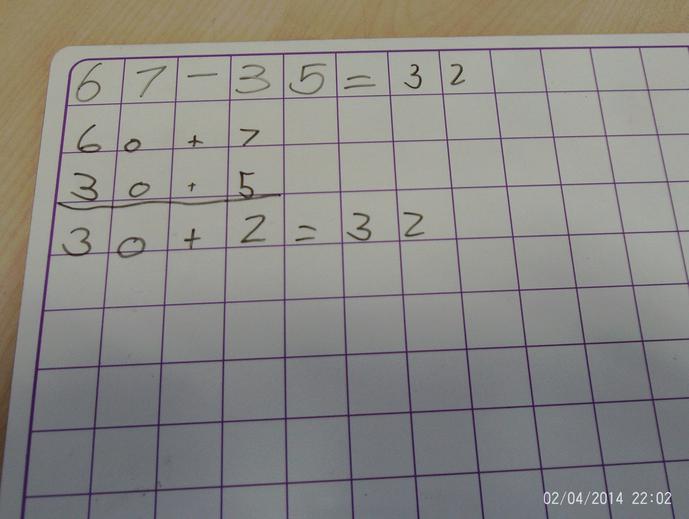 Arrays: This is when children draw an organised number of dots to reflect the numbers in the calculation. The columns of dots can then be counted up to find the total. The example below shows 6 columns of five dots to represent 5x6=. 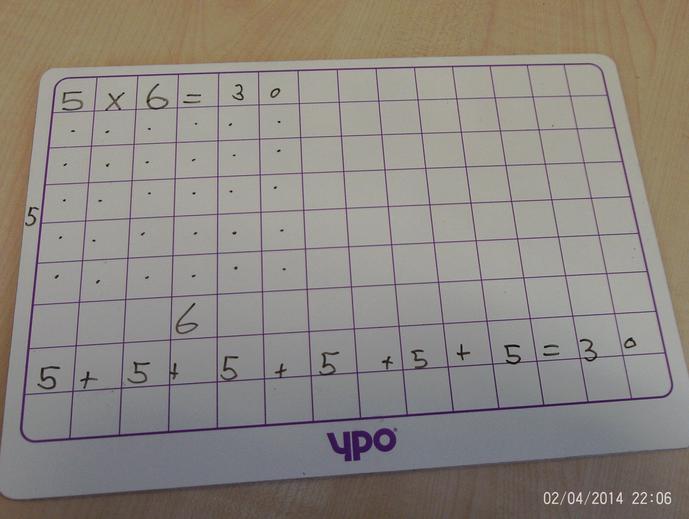 Children are encouraged to use their times table facts to help them when calculating division. They are also taught some written methods that they can use to help them find solve their calculations. 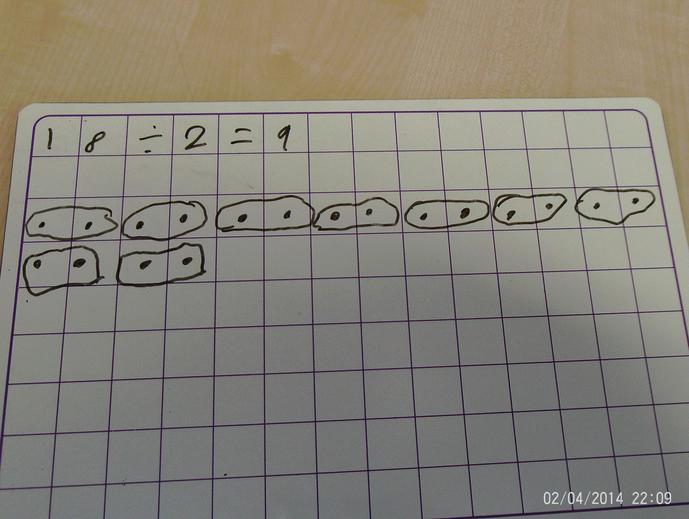